Big News!! I was asked to be a guest designer at Aurora Wings this month for the Anything Goes Challenge, and as you can guess, I was beyond flattered (and excited)!! Mitzi Sato-Wiuff, the artist behind Aurora Wings, is celebrating the two year anniversary of the Aurora Wings Challenge Blog this month, so things are going to run a little differently for this challenge. The ATG challenge that starts today is going to have TWICE as many winners as usual. That means that there will be 2 ACA winners, 2 random winners, and 6 DT's picks!! How awesome is that?

Before I get to my project, I want to tell you about some "crafting for a cause" going on in the Aurora Wings Facebook group HERE. Mitzi is sponsoring a fundraiser until April 3, 2016, on YouCaring to help with conservation of the Slow Loris. As a thank you for donating any amount to her YouCaring fundraiser she is offering a gift of a digital stamp drawn specifically for this event, "Slow Loris Sprite". If you donate a minimum of $10 you also receive a "Slow Loris in Leaves" digital stamp. Both of these images are Special Edition and will not be offered in her store at a later date.

With these Special Edition stamps you can enter the Slow Loris colouring contest in the Facebook group until April 10, 2016. The prizes are as follows: One Artist's Choice Winner ($30 USD in digis + blog badge), one random winner ($30 USD in digis), top 5 (2 digis per person + blog badge), honorable mention (blog badge). All participates in this contest will also receive a 'special mention' blog badge for supporting the cause. All of the details about the fundraising and some awesome Design Team inspiration pieces can be found on the Showcase blog HERE.

And now to my project!! I created a little canvas with Orchid Fairy with detailed Butterfly Wings - Shades of Blue. I coloured the image with Prismacolor pencils. 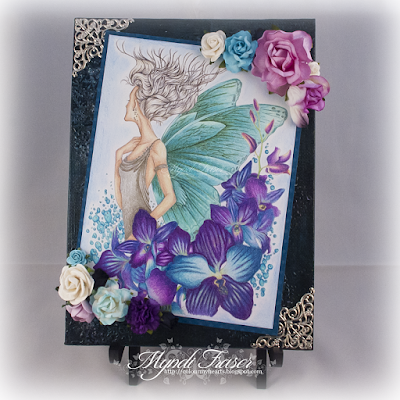 To create the canvas I put down a layer of black gesso on a 5"x7" canvas. After the gesso dried, I used Faber Castell Gel Medium and a Tim Holtz Doily stencil to create some texture. Before the gel dried, I added little metal beads hoping they would adhere and dry in the gel (which they did!). After the gel was dry, I used Lindy Stamp Gang sprays in Hydrangea Blue and Lucky Shamrock Green, to add some shimmer and subtle colour to the canvas. I tried to stay in the same colour families that I used on my image so as not to distract from that.

I added two small silver metal filigree corner embellishments before affixing the image on the canvas. I almost always like to go a little crooked and off center when placing my image on a project. Maybe because I'm a little off center. haha!! I can hardly help myself. It just looks too neat and tidy to me otherwise.

As a final touch, I added some mulberry paper flowers to the corners of the image, again staying in the same colour family as my image.

So that's my turn as a Guest Designer at Aurora Wings. It was a fun little project to do. I hope you like it and I hope you'll leave a little love below in the comments! xoxoxo 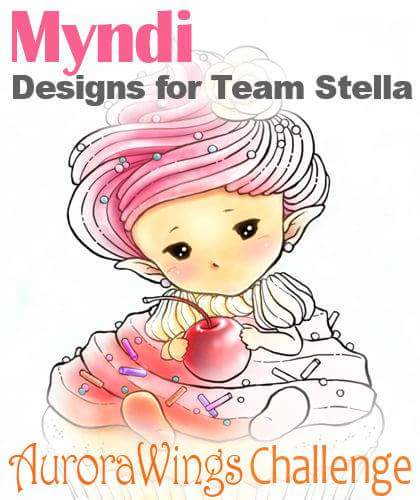 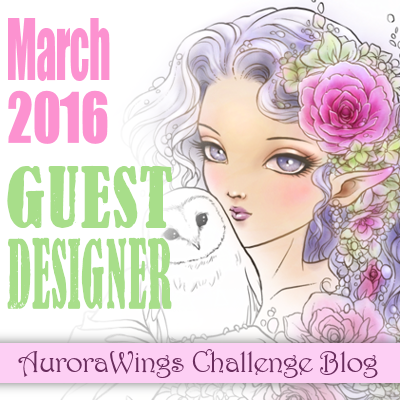